What is solar thermal electricity?

What is solar thermal electricity?

The Moroccan plant uses large mirrors in the form of parabolic troughs (as in the picture above) to concentrate sunlight onto a fluid flowing through a pipe at the focal point of the trough – where all the light is reflected; a parabola is used because this shape focuses the incoming beam to a single line.

The heat collected from this process generates steam, which can be used in a conventional steam turbine system to make electricity. In contrast to the low-temperature solar thermal systems that are used for air or water heating in domestic or commercial buildings, these solar thermal electricity plants operate at high temperatures, requiring both concentrated sunlight and a large collection area, making the Moroccan desert an ideal location.

This is an alternative approach to the more widely used “photovoltaic”technology for producing electricity from sunlight. In a photovoltaic system, the sunlight is absorbed in the photovoltaic device (commonly called a solar cell) and energy is passed to electrons in the material, converting the solar energy directly into electricity. Sometimes, solar thermal electricity and photovoltaics are portrayed as competing technologies and, while this may be true when deciding on the way forward for a specific site, in general they are complementary, using solar energy as extensively as possible.

Currently, the main advantage of a solar thermal electricity system is the ability to store heat which can be used later to generate electricity. This allows the system, at least in part, to disconnect electricity generation from solar energy collection for periods in time. This addresses one of the most challenging aspects of the widespread use of solar energy: variability due to changing weather conditions and, of course, the period of darkness in each 24-hour period when no solar energy is available. 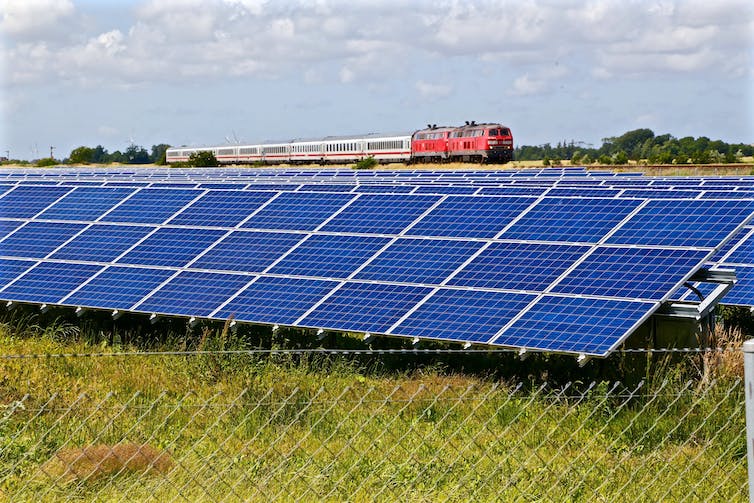 For efficient storage, the system generally uses a molten salt with a high melting temperature, typically around 500-600°C, which is heated by the solar energy. Most recent plant designs have integrated storage, including the plant in Morocco, which reportedly can store enough heat for three hours of generation at the rated power level each evening. As the plant increases in size from this first phase, more storage will be possible. In comparison, for a photovoltaic system to generate outside sunlight hours, electricity would need to be stored in a battery or alternate system, and this is generally less efficient.

There are disadvantages to the solar thermal electricity system. First, it requires direct sunlight, since it is not possible to concentrate the diffuse light that is scattered by the atmosphere. This means these systems are restricted to locations where there is a high proportion of clear days, such as Morocco. 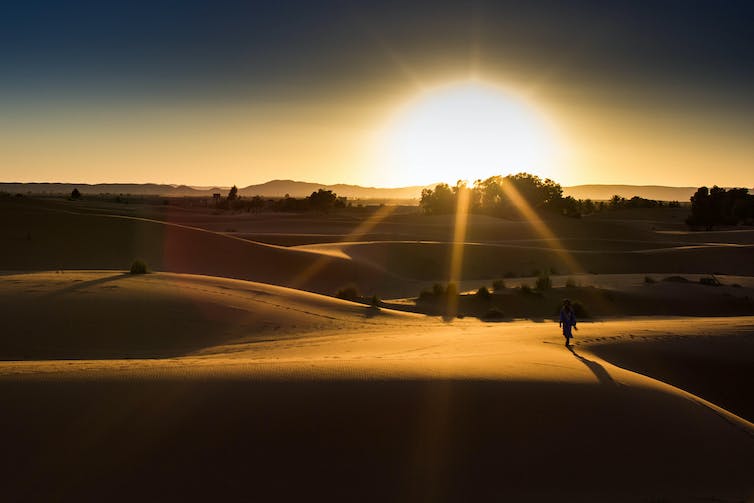 In contrast, most photovoltaic systems can utilise all sunlight, so are much better suited to a wider range of climates – although concentrating photovoltaic systems, which use lenses or mirrors to focus sunlight onto high efficiency solar cells, also require direct sunlight.

Second, solar thermal systems need to operate at high temperatures, both for steam generation and to ensure high thermal efficiency. This means that the system needs to be physically large to collect all the solar energy required. The photovoltaic system, meanwhile, can be operated efficiently in a range of sizes, from very small (to fit on a domestic roof) to vast (plants rated in the hundreds of megawatts).

Third, solar thermal electricity systems are currently more expensive than photovoltaic systems of a similar size. This is partly due to there being a larger market for photovoltaic systems – around 180GW of photovoltaics are installed worldwide compared to 5GW of solar thermal electricity (a typical fossil-fuelled power station is around 1GW in size). However, costs can be expected to fall as experience and the size of the market grow.

There are potential challenges, too: ensuring the mirrors accurately track the sun, keeping them clean, and the need for water (for cleaning and in the generation system). But all these aspects are being addressed in the evolution of system designs.

Solar thermal electricity systems are an exciting technology for harnessing solar energy, to sit alongside the low temperature solar thermal systems for heating and the photovoltaic systems for electricity generation in a wide range of applications. Which one of these is the best choice depends on what you want to do with the energy and where the system is going to be located – ultimately, we will need all of them to substantially contribute to the world’s energy supply.

SolReflection Ltd is a registered charity and not for profit and as such it is governed and abides by the strict rules of the ACNC.

To join the charity please register and express an interest in volunteering or working for the charity in the registration form outlining the areas you are interested in or skills you want to bring the the organisation.